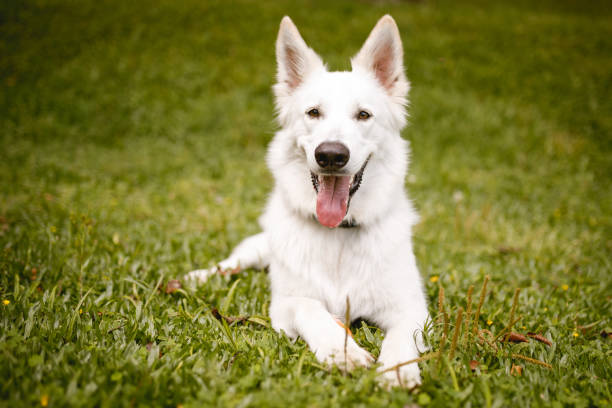 As a very trainable, loyal, and devoted dog, German Shepherds have long been a first choice for working, herding, and family dogs. There are various types of GSDs based on their lines, coat types, and colors including but not limited to white.

All white German Shepherds are pleasant to look at but uncommon and unrecognized GSD variety. They are characterized by white coats and are identical to any other GSD except for color. Since white is considered a fault by the major kennel clubs they are not allowed to compete in show rings.

White German Shepherds are not pure white but are off-white or ivory-white. When put against a pure white backdrop, the white shade appears creamish or yellowish.

White on German Shepherds occurs due to two genes. One gene pair controls the production of red color pigment while the second gene dilutes the pigment by reducing the amount of pigment produced. This causes pups to be born with white fluffy coats.

White German Shepherds are pigmented, unlike albino dogs which have no pigment. In addition, a white GSD can produce colored puppies.

For more on the white coat color genetics and other traits, Scroll on.

Before we proceed, let’s define some basic terms to avoid any confusion

These two pigments are responsible for all possible coat colors and color combinations. True pure white coats on most breeds are due to the absence of either pigment. But this is not the case for the white GSD which has fewer pheomelanin pigments than required and hence appears white.

Because white German Shepherds have some pigment, their coats are not pure white but exhibit a creamish hue.

As mentioned earlier this is because of two genes. First, a GSD pup has to inherit two copies of the “e” allele for an e/e gene combination. Two copies of this mutant MC1R gene variant block the production of black eumelanin pigment but promote red pheomelanin pigment synthesis in the hair shaft. This is known as recessive red and is the most dominant gene combination. As such, dogs with this gene can have other genes for other colors or patterns such as sable but they will not be visible since recessive red dominates them all.

However, intensity genes can alter the appearance of the red color by affecting how much pigment is produced. On GSDs, the intensity genes decrease the concentration of the red pigment to pale shades such as cream, blonde (golden), or ivory white. The intensity gene does not affect eumelanin pigment hence the color of skin, nose, eyes, lips, paw pads, etc remains unchanged. The extreme dilution of pheomelanin to appear white is caused by two mutant variants of the intensity gene i.e i/i combination. The degree of dilution may differ from dog to dog causing shades that range from cream to white. Some white GSDs may also have a bit of cream or patches of tan.

The degree of dilution may be regulated by other unknown genes or modifiers to explain the cream-to-white range in dilution. As of the time of writing, there is still more to discover about pheomelanin dilution and research is still ongoing.

Because all white German Shepherds are e/e at the E-locus (MC1R gene location), genetic testing can determine if a dog is a carrier of the gene for breeding white pups.

Though white German Shepherds are considered a serious fault they are purebred dogs. Thus, their physical traits match that of the standard GSD with exception of the coat color.

A uniform snow white coat is preferred but these dogs can display a range of shades that include;

Some dogs may have yellowish or cream patches bleeding through the white coat, especially on the back.

As mentioned earlier, the pheomelanin pigment responsible for the white color does not affect the skin, nose, or eye color. Their colors will match the eumelanin pigmentation.

On a white GSD with black eumelanin pigment, the eyes will be dark brown and the nose will be black.

But on dogs whose black pigment has been diluted to blue, the nose will appear bluish and the eyes hazel blue.

The table below offers a better breakdown;

All German Shepherds including the white variation are tall, well-muscled, and athletic. Adult males tend to be large and heavier than their female counterparts regardless of color.

These dogs are intelligent, eager to learn, and highly trainable but tend to be wary of strangers. On the flip side, some can be mellow, calm, welcoming, and cuddly. It all comes down to how well the dog is raised and socialized from puppyhood, not the coat color. All in all, each dog is an individual with a unique personality and behavioral traits.

However, GSDs are not suitable for novice dog owners as they require plenty of space, exercise, and consistent training and socialization. The white coats also require extra work to stay clean and attractive.

A white GSD puppy is costlier than the standard bi-color German Shepherd (Black and tan/Saddle tan). You can expect the price to range between $800 and $2500 for a single puppy depending on the breeder, line of puppies, location, pedigree, and so on.

It’s worth noting that finding a white GSD pup is more difficult than the standard colored pups. Of course, for a healthy pup, ensure it is from a reputable and trusted breeder. The breeder should allow you to meet the pup’s parents before buying and provide you with health guarantees.

To produce white German Shepherd puppies both parents need to either be white or carry the hidden gene combination that they pass on to the pups. This is because the red and intensity genes are recessive and a pup needs to inherit a copy of each from both parents to have a white coat.

Since the recessive red and intensity genes seem to be inherited together, 2 white parents are guaranteed to produce all white puppies. But if non-white parents are carriers of the genes, only some of the pups in the litter will turn out white.

The American Kennel Club (AKC) breed standard does not recognize the White German Shepherd and considers it a major fault. This is because they do not consider this dog an adequate herder due to the white coat that resembles that of sheep.

As such, these dogs are disqualified from the show ring since rich undiluted colors are desired. This only applies if you intend to show your dog as they can still be registered for participation in other events such as agility, obedience, tracking, and so forth.

The United Kennel Club (UKC) recognized the White Shepherd as a separate breed in 1999 but as a descendant of the German Shepherd dog.

The American White Shepherd Association was created in 1995 to petition for recognition by AKC.

All kinds of dirt, debris, or mud will shout on any white-coated dog. White GSDs need more upkeep and grooming to keep their coats clean, neat, and attractive. Without proper care, the coat will appear yellowish, grayish, and old.

For starters, brushing will be essential to remove dead hair, dirt, and grime. This will also help spread natural oils on the dog’s fur and maintain its sheen. As you brush the coat look out for any signs of skin infections and other issues such as fleas, ticks, and so on.

When bathing the dog use shampoo and conditioner specially designed for white coats to keep them sparkling. The shampoo should be pH neutral and gentle on the dog’s skin. If the coat has yellowish stains, consider using bluing dog shampoo to brighten up and enhance the white appearance.

Avoid using products with chemical ingredients that may be harmful to the dog’s skin and coat.

However, bathing your white furry friend too often will not be ideal since it strips the coat of its natural oils and leaves the skin dry. A bath every 4 to 6 weeks should be sufficient for most dogs.

Between baths, use pre-moistened wipes, baby wipes, or a wet paper towel to wipe down the coat. This will remove stains and remove coat odor, especially with a highly active dog. You can also use baking soda which is a natural stain remover and mild on the dog. Simply make a thick baking powder paste, apply it on any stain and use a wet cloth to remove the stain.

In addition, prevent tear stains from forming on the white coat by wiping your dog’s eyes about twice each day or applying a small amount of cornstarch under the eyes to absorb wetness. A tear stain remover will be handy in dealing with existing stains.

Contrary to what some believe, the white German Shepherd does not have additional health issues associated with the white shade. They are as healthy as any other GSD and susceptible to the same health issues such as hip dysplasia.

Unlike albino, merle, or piebald dogs, White GSDs do not go deaf or blind due to the white coat as the gene does not affect the ear or iris pigmentation. However, these dogs can go deaf due to infections, injury, congenital problems, etc all of which are unrelated to the white coat.

Although White German Shepherds have become popular over recent years with particular communities, they are still uncommon and considered rare. However, they are not too rare and it is possible to get your hands on one by looking in the right places.

If you are looking for one of these dogs, your best bet is breeders that specialize in white GSDs.

While it is possible for a white German Shepherd to have a pink nose, not all have pink noses. Pink noses are common in white GSDs with isabella genes that will only show through the skin, eyes, paws, and nose but not the coat.

Only white German Shepherds with genes for isabella or lilac coats have blue eyes.

Why do white German shepherds shed so much?

Most German Shepherds regardless of coat color shed year-round. They also blow their undercoats twice a year in fall and spring when they undergo heavy seasonal shedding. Heavy shedding is not unique to the white German Shepherd since the coat feel and texture are similar.

White German Shepherds puppies are born white and stay white as they do not change color. However, some may appear to have yellowish or cream tints when exposed to the sun.

Is a white German shepherd a good family dog?

Similar to any other German Shepherd type, white German Shepherds are great family dogs. The white coat does not affect their family-friendly disposition.

However, as with any dog, they require proper socialization and training to reach their level best and to get along with everyone.